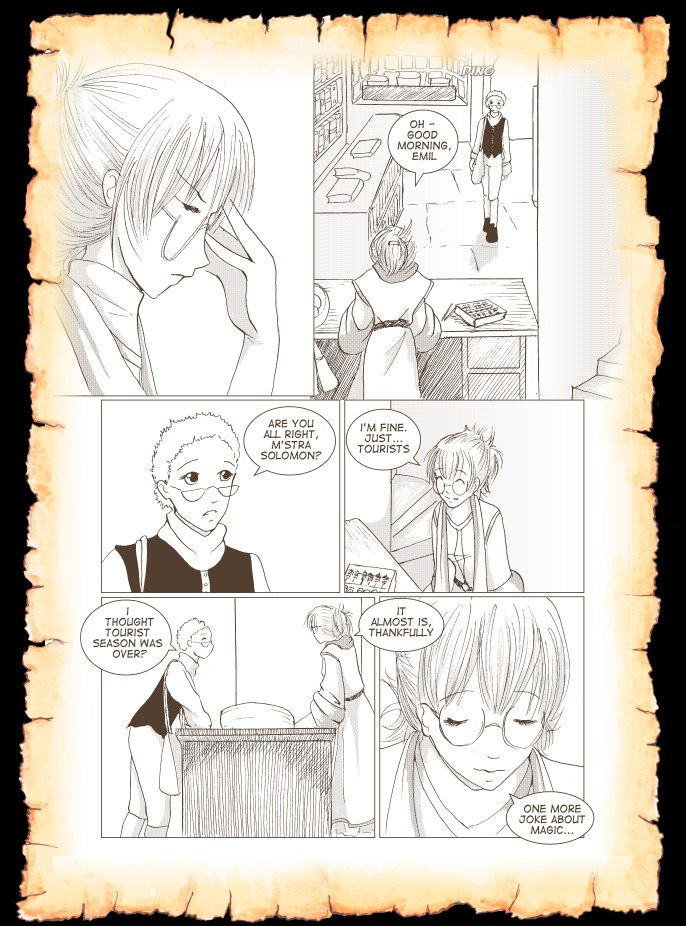 
Apologies to people who found Cato's handwriting a bit hard to read. What he wrote (not counting the notes on the diagrams) is this:

Reached the gorge today. This plant was growing close by. It seems to spread by suckers, and likes the damp air; I've never seen it far from a river. I think it is related to spikegrass but isn't the same - it's got different shaped leaves, and obviously can grow further north. Adapted for cold? Root system is protected underground, so new shoots can grow from established system. Does that give it a competitive advantage? Will take cutting on way back.

Nothing at all interesting today. Locations of marked trees noted down. We lost one. Will take measurements on the way back.

Rain today. Took samples from the tuber plants I saw last trip. Must analyse their structure, they seem to be different from the cultivated tubers Thea grows. Saw more of the plant above, growing by a small stream.

Saw those ruins again. They're a good landmark. They look a bit like some of the older university buildings - did Ildyrium once reach this far out, or was there a settlement here built at the same time as those older buildings in Ildyrium? Can't tell what they were for. Must get Thea out here. Interesting creepers and lichens growing up the inside walls. They almost look like they're symbiotic on a coarse level.

I need to come back here and spend a week or more doing this properly. Perhaps Danvin's students would appreciate a field trip?
Actually, no, that would be a nightmare.

The other thing I just updated is the gallery - with an illumination, done in hopefully a similar way to that the ancient monks used when they illustrated books like the Lindisfarne gospels, or the Book of Kells (See here for examples and descriptions). My College offered me a chance to go on a one-day workshop in illumination, so I duly turned up, and a lady named Penny Price, who is one of the College scribes (what an awesome title!) showed us the whole procedure. You start by tracing your chosen image (I did modify mine, I have to admit). Then you dust the back with Armenian bole and draw over it again with it pressed to vellum (calfskin. Or good quality watercolour, for those who don't like that idea), and the bole, which is reddish clay dust, is transferred onto the vellum. Then you ink it with diluted ink and a dip pen. Then you put the gold on, which involved a lot of heavy breathing. You paint the gum where the gold should be, then wait for it to dry, and repeat until there's enough there. When it's dry and there is enough, you breathe on it until it's ever so slightly not dry (5-6 long breaths. I felt really quite dizzy by the time I was finished), attach the gold leaf and hope it takes. Then you watercolour or gouache the other bits, trying to match the original, then you paint the lines in with a tiny brush and black or white paint. It's incredibly intricate work, even on a relatively big piece like the one I chose, and thinking about the monks doing this day in, day out, with bad light in a cold room, hunched over their desks for hours on end, fills me with awe and makes my back ache.

So anyway, here's my griffin, from a bestiary dating I think to around the 15th Century. I modified him quite a bit - he's got a more fierce expression than the original (and I was sorely tempted to give the pig a sweatdrop!). There was no sun in the background, and the gold leaf on the two circles was a little more ornate. There are a lot of flaws (they didn't use compasses - so we didn't get to either!), but I'm still really pleased with him, and it was a lot of fun, not least because it's exploring a different way of making pictures ^^