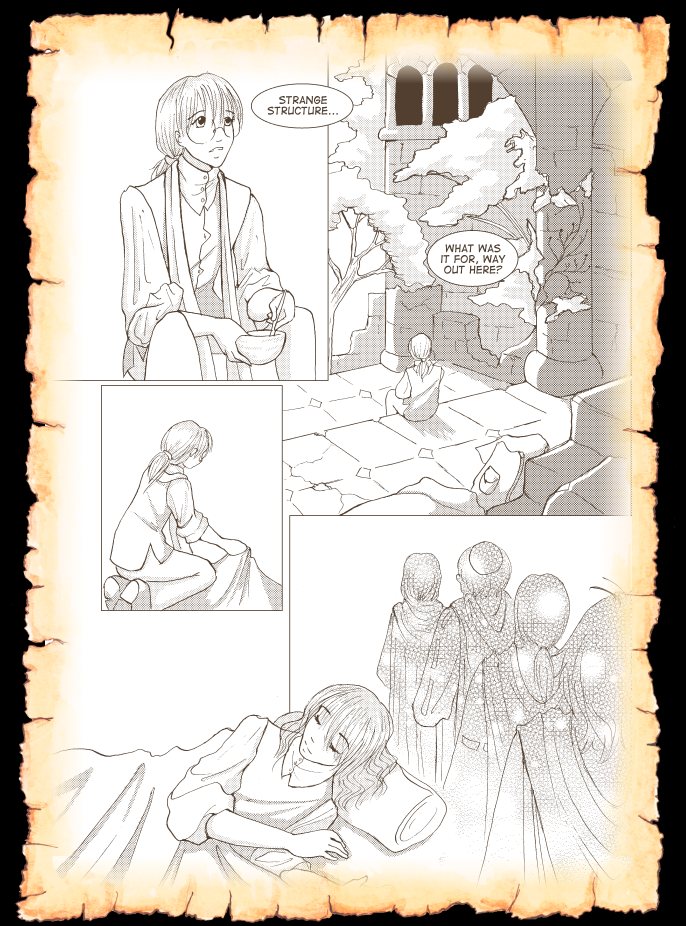 
I almost ran out - this page was only finished two days ago ^^;; It's because I do Ambient Rhythm in bits, and once all the pages for a section are done, I tend to forget to start doing them again in time for the next section. But it's done, so it's all right :)

With respect to this mode of working, I've been thinking about the difference between web and print comics again. Phoenix Feathers was a pure webcomic, intended to be updated regularly with a bit of plot or a joke or both every strip. I will never print it in its current form - not only is the art rather old now, and in pencil, it just wouldn't work as a continuous comic. It's meant to be read in strips. All my other comics were intended for print, which is difficult to sync with regular updates. Looking for the Sun, of course, avoided the whole problem by updating one issue at a time, but that's not what I'd call a proper webcomic, to be honest. It's a comic that happens to be online. As such, I could take the time and the page space to set scenes, and I didn't worry about having a joke or an obvious plot hook on every page, because the updated chunk was an entire issue, which would (or should anyway!) have plenty of both over its twenty-odd pages. But with Artifaxis first, and now Ambient Rhythm, I'm attempting to produce a comic which does have a hook of sorts for every update, and yet reads smoothly as a printed comic. I think Artifaxis suffered a bit because of that. Because Phoenix Feathers had irregular length strips (enabling me to cram in a joke even if a lot of set up was required), I tried the same with Artifaxis, just running pages together until a joke or a plot point provided an excuse to stop. That might have worked, except that I was never able to thumbnail the comic beyond the next couple of updates. That was how I thumbnailed Phoenix Feathers, but then, when each update is a standalone strip, that's fine. It leads to a tendency to wander, but that's OK for a webcomic like that. It didn't work so well for poor Artifaxis, which I think works better read in its entirety (either as a print comic or online) than it did as a regularly updating webcomic. I am fond of it, but it does wander, and the planning could have been a lot better.

For Ambient Rhythm, then, I've chosen to stop trying to shove in a specific joke or plot point per update. Even in a printed comic, every page should do something, otherwise what's the point in drawing it? So Ambient Rhythm updates one page at a time, and because of the way I've been planning it - multiple pages at a time - I hope to avoid the 'wandering' problem. I have beaten out a rough plan for the story to come, as well - I knew from the start what the plot was, but tying in strings takes effort ^^;; I also deliberately chose to set the story in one location, partly because I've had two journey-based comics on the go until recently, and it's nice to have a change, and partly because it's easier to follow, which is important in a long, story-based comic. Anyway, I'm enjoying updating it and I'm looking forward to moving it along - I hope it's a good read ^^