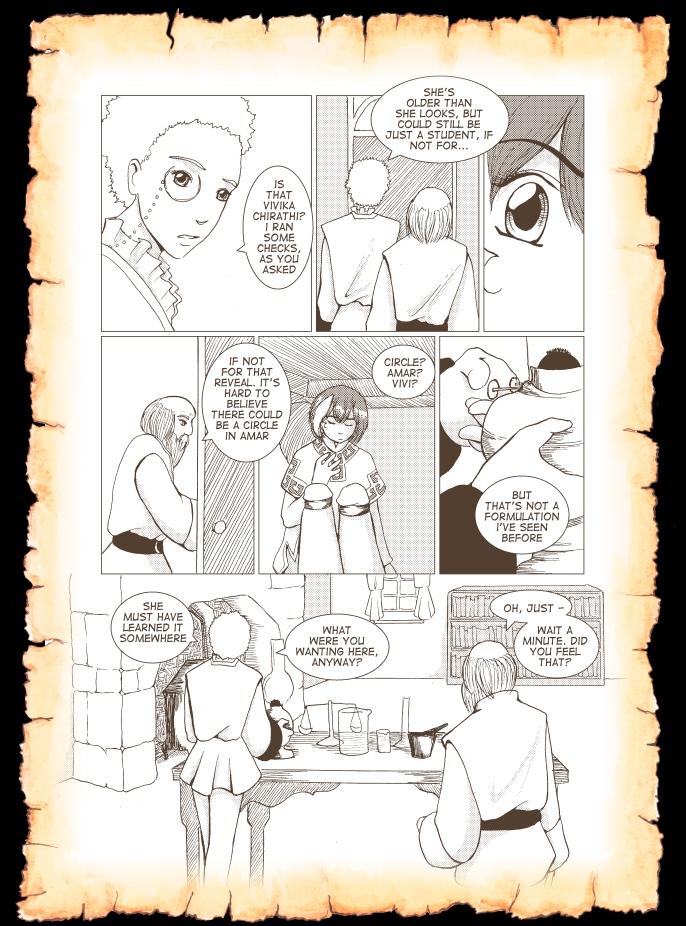 
I've been meaning to get round to rambling about humour in webcomics for several weeks, and there's always been a reason not to - it's late, or I'm in another country or something. So I will do so now, briefly because it is late, but at least I'll have said it (not that it's, you know, important or anything).

When thinking about webcomics (like I was here), I was thinking about the difference between story-based ones (like Ambient Rhythm and, say, Freakangels), which are basically comics that happen to be online and updated regularly, and are probably best read several pages at once, and gag-based ones, such as Sequential Art or Ozy and Millie, which offer a few panels with a point to each update. They can have an ongoing plot - Dominic Deegan is a good example - or occasional story arcs, but they're mostly self-contained updates. I've never had one like that, and I'd like to try it. So I was thinking about how to manage something like that, and realising that it's not really possible to have something a reader can dip into that also has a long, overall plot. Again, Dominic Deegan is a good example - it started off very simply but now it's got plot threads dating way back. I don't know how easy it'd be to start reading it now, because I've been reading it for a while, but I think I want something more like Ozy and Millie, where you really can dip in and out, and any story arcs are reasonably short and self-contained. That's very different from my normal storytelling, but that will probably do me good.

I think the point of all that rambling was that I was considering humour in webcomics and how it's generated. It seems to me that there is humour which is based entirely within the story - like Girl Genius, for example (possibly a bad example, because it is a long story page-at-a-time thing, but almost all the pages are funny in their own right) - and humour which is based on the reader's knowledge of the world outside the comic - like Sequential Art, which pokes fun at, among other things, MMORPGs and online gamers. That's another slightly odd example, because Sequential Art is based mostly in the real world (kind of) so the humour could be called internal, but I think there's a reasonably clear difference. Perhaps Phoenix Feathers might be a better example - it's clearly not meant to be the real world, but for a lot of the strips, a knowledge of the real world is required for the humour to work. I suppose it's a blurry definition, but useful for me. I don't think I want to write something which laughs at the real world, however well-disguised it is. I'm not sure I can carry that for long enough, and the web has plenty of really good webcomics that do that already. I think I prefer humour that is self-sufficient, based entirely in the world in which the comic is set. I'm not sure why - maybe because it's more consistent as a story, not that the story is really something to worry about so much in the kind of comic I'm thinking of. I very much enjoy reading the comics which laugh at the real world, but I don't think I want to write (another) one.

Anyway, that was my rambling, and maybe I'll manage something along those lines when Ambient Rhythm finishes. Watch this space. Maybe ^^;;