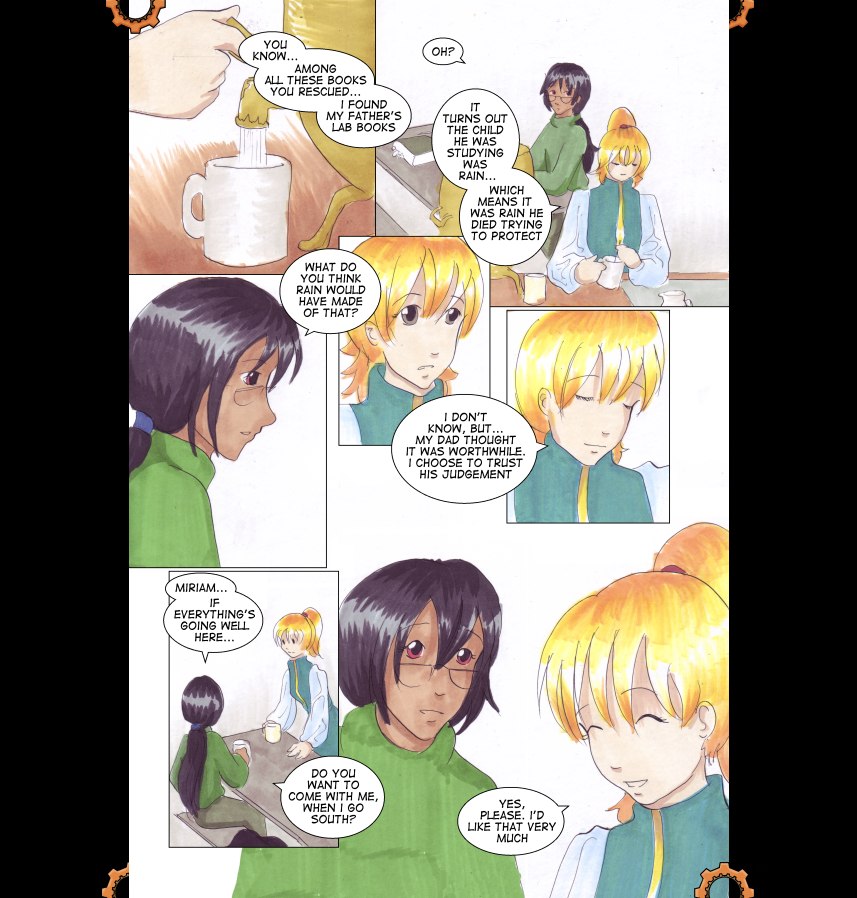 
Well. The end, at last. I hope you enjoyed the comic - apologies for the cocked up storytelling. Artifaxis has been an experiment in several ways, and in some ways it worked, and in others, it was less successful.

It was firstly an experiment in running a comic for web and print simultaneously. That's the biggest change since Phoenix Feathers - the one that really stood out, for me, anyway. Webcomics that update on a daily basis or multiple times a week are quite different from print comics, or online comics that update infrequently but with a big update (like Looking for the Sun). A regularly updated webcomic usually can't afford to have a lot of pages, and each update has to have something to keep the reader interested, be it humour or plot or a combination thereof. However, when put together into a book, this can render the sequential story a bit choppy, because each scene is defined and separated from the ongoing story. There are a lot of comics out there that are both web and print comics, and are good, and I tried to do the same with Artifaxis, but I don't think it worked, not entirely. That is, I think it has worked better as a comic than as a regularly updating webcomic. It's a shame to spend so much time on a comic and not be able to print it, so I'll try again but I'm still thinking about how to do it best ^^

Second, Artifaxis was done in colour. I have really enjoyed having a full colour webcomic, but it hugely increased the workload, and on weeks when I was busy, it was difficult to get it all done well. Also, it doesn't print (well, not without costing the earth), so I think colour comics, from now on, might be limited to the occasional page or two here and there. Sorry u.u

On a related note, I chose to use colour because, at the same time I started Artifaxis, I got a collection of alcohol markers (Deleter Neopikos, as it happens). When I started doing Phoenix Feathers, part of my reasons for doing it was to improve; drawing on a regular basis forces improvement at quite a pace. I was totally new at markers then, so I hoped that using them for Artifaxis would not only mean I could do a colour webcomic (since I take too long to colour using the computer), but would also, ideally, mean that I would improve at using them. I think it's worked, on the whole, but I still need lots more practice. I'm sure there'll be more colour pages in whatever I do next ;)

Artifaxis was intended to be a steampunk style comic, at least at first, but that didn't work well at all. I love the genre, but did not do enough research to be able to put in the right touches (so serves me right, really. Back to fantasy next time. Everything I read is research for that ;). It is science fiction, and I suppose that's also a first, since the only other science fiction story I have done was my RSOM 2 short story which I drew long after starting Artifaxis (it was much more standard science fiction than Artifaxis is, too).

So it has been, from start to finish, an experiment, which I suppose is appropriate given the nature of the story and several of the main characters. I hope you have enjoyed it; I have enjoyed creating it :) I'd like to also point out that the story is almost as much Moonshadow's fault as mine. It was, after all, his idea ;)