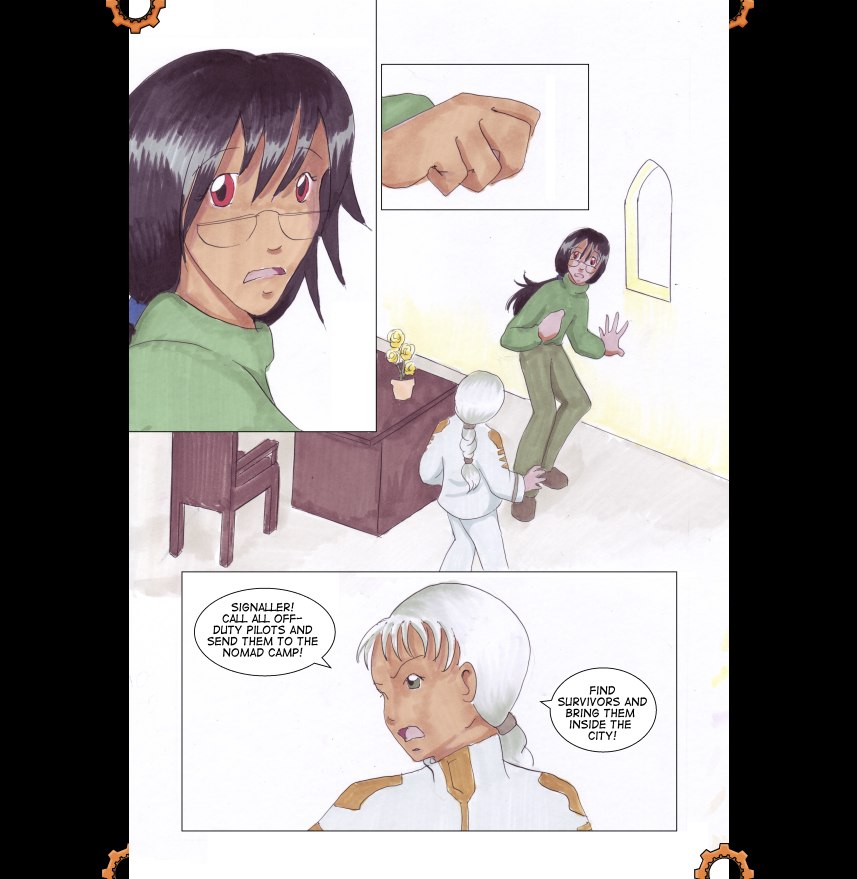 
We had an amazing time in Japan. What follows is going to be reasonably lengthy, but it's worth writing about, from my point of view. Enjoy or not, as you please :)

What we did: We flew on Saturday morning and landed a bit after Sunday lunchtime (the International Date Line stole half a day o.O;;). We didn't do much on Sunday save meet Carol (our gracious host), admire her lovely house and recuperate from the ages long flight. We flew with Cathay Pacific, who were both cheap and pretty good. We ate okonomiyaki that evening, a kind of pancake-y thing with pork and other things in. Very nice.

Monday we slept in and then went to Kamakura to see temples after eating takoyaki and taiyaki at the local food court (I became addicted to taiyaki). Kamakura is also where Hitomi's school is set (Escaflowne), but we didn't see any dragons, or cute kings with black hair and wings. We did see some very impressive shrines, a lot of pretty back streets (while looking for said shrines) and some lovely hillside. The Myohonji temple is my favourite; it had a cute temple cat who came to say hello, and it was halfway up a hillside and beautifully secluded with trees towering all around. Very quiet. We ate tonkatsu that evening, which is pork in batter with cabbage, and is an order of magnitude more tasty than it sounds. We stopped off in the arcade on the way back, and I picked up three cute little round plushy beasties from one of those grabby machines. One of them is a hot spring hot rock; I don't know about the others (but one has a moustache!). Carol and I played the Taiko drum arcade game, and I gave myself a blister ;) It's a lot of fun.

Tuesday was Akihabara day! We spent a little while marking off places to visit in the geek guidebook, then went round them all, except for the shop that sells cat ears, which appeared to have up and gone. Perhaps it was a magic shop? We also managed a maid cafe, which was, well, kind of normal, really, except the waitresses wore maid costumes. They were cute, and the food was nice. We finished off by visiting Animate, a big, big store, and combing through it top to bottom. Moonshadow bought 9 volumes of the Quiet Country Cafe manga, and I drooled over art supplies in the next floor down and came away with a large number of cheap Neopiko markers and some new nibs and ink to play with. I also found some boots for the Kite and Saryth dolls, only a year and a half after getting them ^^;; That day, we ate at an Izakaya, a kind of pub that serves food; lots of little things, all of which were nice.

Wednesday we went to Mitaka, to the Ghibli museum. On the way, we found a little coffee shop which was almost identical to the maid cafe except the waitresses weren't in costume, and we were allowed to take photos. The Japanese do very nice cakes. The Ghibli museum was magical, inspiring and all too small; we came out shortly after lunchtime and had ramen-by-menu-roulette at a nearby shop. Then we wandered round Shibuya and Shinjuku (where we saw a huge queue of people all eagerly waiting to get into a Krispy Kreme Doughnut cafe, of all things) and went home. The food on Wednesday was yakiniku; marinated meat served raw and cooked by us on a tabletop barbecue. I was in heaven! The meat is so, so tasty, and it was so much fun! For dessert, we had apple slices, also grilled on the pot with butter and cinnamon - gorgeous! And we were introduced to the concept of 'sours', alcoholic fruit drinks. I didn't hear Carol describing them properly; she said they were alcoholic, but I didn't catch it quite, and on tasting it assumed that I must have missed the 'not', since the lychee sour I had didn't taste at all alcoholic.

On Thursday, we went to Ueno Park, and wandered around that for most of the day. We went to the zoo there, which had lots of cute small fluffy things, and also some cute small (and big) scaly things. And we went up Tokyo Tower, where I had fun giving myself vertigo, but it wasn't knocked down while we were there. We finished off by going to the shopping cente by the Tokyo Disneyland on an errand, which was very odd - we chased around this American-ese centre trying to find a cafe with our amateurish Japanese. We were successful, in the end. We went out that night to eat shabu-shabu and sukiyaki; both are communally-cooked meats again. Shabu-shabu is very thin slices cooked almost instantly in boiling water, and sukiyaki is the same thin slices but cooked in a wok-like pan with water and sauce, then dipped into raw egg. I preferred the sukiyaki, but both were lovely. I had two sours and then ordered some sake, at which point I found out that the sours had been alcoholic and I had half a bottle of sake to drink, which nobody wanted to share with me. It was lovely, lovely sake, though.

On Friday, we headed out to Gotemba, which is where the buses to Mount Fuji go. That is, when the road's not blocked. Unable to get anywhere near Fuji-san, we wandered around for a bit - it's a quiet, country-ish place, very different from Tokyo - and went back to visit Rikugien Park in Tokyo, which was lovely. We had special mochi and green tea there; the mochi had to be eaten first and was very sweet; the green tea was very bitter. That night Carol was busy, so we chickened out and ate at the okonomiyaki place again. I tried menu roulette with the sours, and ended up with an oolong sour, which was incredibly alcoholic and not nearly so nice. Moonshadow got away with just asking for the available beer.

On Saturday we got up late and packed, then hung around until Carol brought her next guests back (Andy and Laura, both chuffed, travel-stained and jetlagged). We went out with them and went up the Landmark Tower, and Laura and I forced Carol to sit with us for a caricature-type picture drawn by one of the artist team. He did a lovely job, even if we all ended up with blue eyes (because all foreigners have blue eyes, of course). Then we ate, and they headed off for some rest, and we went to Tokyo station to try and get to Narita airport, because our flight was at 9:45 the next morning. And there began the problems. When we got to Tokyo station, there weren't any more trains going as far as the airport, although some still ran to stops along that line. The first train in the morning went at 5:04 and arrived at 6:30, which would have been fine (we had no way of getting to Tokyo station from Carol's for that time, which is why we decided to go to Tokyo station the night before), but we needed to do something with the rest of the night. We'd have preferred to wait at Narita, but there were no buses going either, so we headed off to check out a hotel. It would have cost us 300 pounds to spend the night there (!!) so we decided against that, and went back to sit in a quiet spot in Tokyo station and wait. I got a page of Artifaxis drawn and inked. We weren't the only people to have the same idea, but at 1:30am the station guards came and cleared us all off, because the station was closed from 1:30-4:00. We saw an 'airport limousine' coach pull away as we came out of the station, but found out from a friendly taxi driver that there were no more and anyway, Narita airport itself closed at night so there'd be no point our going there. At this point, the lack of routes to Narita during the night began to make sense. We wandered around for a little while before finding an Irish bar, of all things, which would stay open until 5, so we parked ourselves and our two huge bags there and drank coffee until 4:20 or so, and I coloured a page of Artifaxis. The remainder of the journey - to the airport, from Narita to Hong Kong, Hong Kong to Heathrow and finally Heathrow to Cambridge - was comparatively trouble free, bar the 90 minute delay in the Hong Kong to Heathrow flight. We got free food credit out of Cathay Pacific for that, which we promptly spent in Millie's Cookies ;) We got home at 1:00 or so, spent an hour and a half unpacking and checking email and went to sleep at 2:30. I was actually fine with going to work yesterday, probably because we did get quite a bit of sleep, albeit in short sections, on the plane and on the coach.

The good: The weather was great; sunny and warm but not too hot or humid. The food was fantastic. Getting around was really easy; all the station names are in English as well as Japanese. Everyone was very friendly, even when we were reduced to the point-and-grunt method of ordering food. Akihabara was wonderful even without buying much, and the Ghibli museum was pure magic. It was great seeing Carol again, and meeting her friends. One thing I really enjoyed was simply wandering around in a different country and culture and experiencing a bit of it. It's so much fun.

The bad: Not much, really. Long, long flights, and the horrible toilets in some places that resemble the French squatteries we used to have to use when on holiday in France.

The weird: The toilets with heated seats and buttons to press to make flushing noises. Everything shutting down at night. The Irish bar. The adverts featuring Western women. The architecture; people tend to buy land, knock down the pre-existing house and build a new one, which results in a hotch-potch of building styles and materials, which is admittedly great fun to look at. The constant conflict between traditional and modern (see the toilet descriptions above for an example ;).

I feel like we crammed two weeks of holiday into one, but it was an amazing time. Thank you very much to Carol. We want to come again, please! *^^*