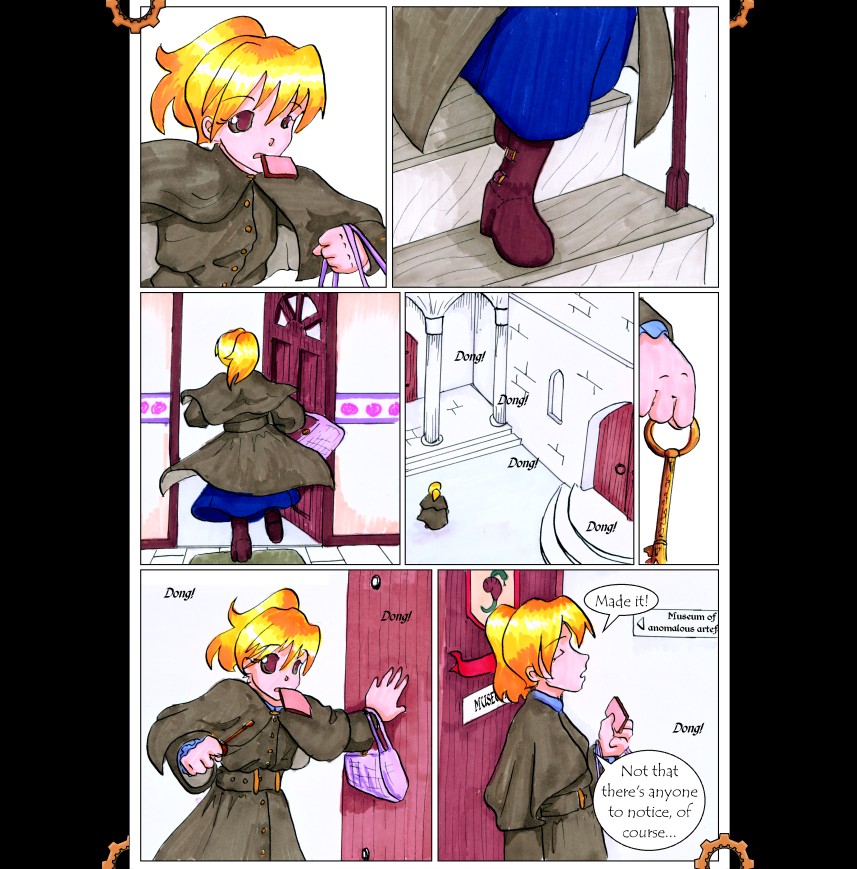 
On the way back from Minamicon, I got the chance to update on a few bits of stuff that rather needed it, although there's still more to come. So, before I wiffle about Minami, here's a list: new AMV up, character entries for Rua and Lance, a couple of new images on the Looking for the Sun splash page list, a pencil sketch of Saryth computer coloured by Moonshadow and an Occasionally Asked Questions comic for Looking for the Sun.

Whew. Well, Minamicon was fun. We didn't sell vast numbers of comics but we did get a steady stream of visitors to the table, which was good. The anime we saw were almost all OK, things I wouldn't mind watching more of, but nothing that grabbed my attention the way Fullmetal Alchemist did, for example. This includes Air, Sukisyo, Meine Liebe (that was amusing, although not, I think, meant to be), Phantom the animation, Xenosaga, Tactics (I rather liked this. Bishy with black wings), Mahoujin Guruguru (the original RPG parody, apparently), and Starship Operators. We also missed a fair few I would like to catch up on, including Lyrical Nanoha, my-HiME, Kujibiki Unbalance, Yakitate! Japan (it is to bread-making what Hikaru no Go is to Go, I'm told), W-Wish, and Tales of Phantasia. The two I saw that I didn't like were Tri-Zenon (a bit generic) and Utakata. Opinions on any of the above are welcome; I'm not going into them now (I'd like to get some sleep at some point).

Apart from all the anime, I also participated in the masquerade, playing Sagi Tsukiko (of Paranoia Agent) along with a large pink Maromi which I made partly in the car on the way there, and also with Tsunami who made a pretty impressive Shounen Bat. We went on last, but it was fun. We also acquired a loo seat cover with Jiji of Kiki's Delivery Service on, which is now adorning our loo, and is much more interesting than the plain grey lid. We also won the AMV competition, with The Elements (the AMV mentioned above). It's basically 1 minute 24 seconds of nigh-solid lip-synching, and although it got a chuckle I suspect the only reason it won is because Many Lemons did not enter anything this con. The Raining Bishounen AMV was shown shortly after and that got a much bigger laugh. It was still very satisfying, though, and we got the first Trigun DVD as a prize. We also sat on the AMV panel, which managed to gain an audience of about ten by the end of the session (it was two when we started).

We also spent much time chatting and drawing in the bar, and not quite enough time sleeping. I'm afraid I did sleep on the way home in the car, so I haven't finished a number of things I keep meaning to update. As well as the first issue of Artifaxis, we also released a free (black&white) printed prologue as an advert, and I will be putting that online as soon as I can - hopefully tomorrow. Unfortunately, I have to go to work as well... it's always such a shame when a convention ends. Ayacon is next on the list of conventions, but there is also the Artists and Illustrator's exhibition in July, which should be interesting.