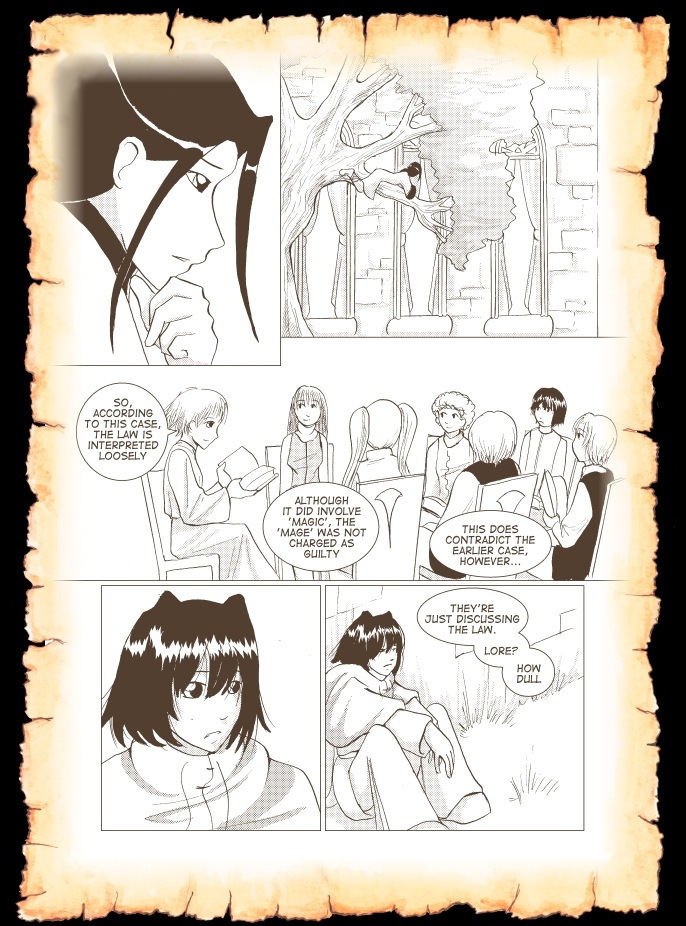 
We've been trying out a few anime recently, in an attempt to catch the best of the new stuff coming over :) So I'm going to ramble about the good, the bad and the weird. Just as a warning, some of the links go to Wikipedia pages rather than the ToothyWiki (because they've not been reified yet) and Wikipedia pages about anime tend to have spoilers. If you follow the links, on your own head be it :)

On the good list, we first saw Allison and Lillia, which is an odd series. It consists of short arcs featuring the same characters, and while the plots are good, the arcs aren't always written well; the first one, for example, finishes very abruptly. For all that, during the arc, they're engaging and hard to stop watching. Apparently, it's based on two books ("Allison" and "Lillia and Treize") by the author of Kino's Journey.
The second one that we quite liked is called Amatsuki, and appears to be one of those anime where a modern day schoolboy gets sucked into a fantasy world which resembles ancient China/Japan. It's pretty, involves monsters, and has reasonably interesting secondary characters, although we've not seen past the first episode.
Mnemosyne was weird. It's a Gainax thing, and the main character, Rin, is a private detective who prefers cases such as finding missing pets, but usually ends up fighting zombies and kicking much butt. In a gory and slightly disturbing way. I have got into the bad habit of checking these things out on Wikipedia and have thus spoilt myself for the revelation of what Rin actually is - I'm not sure if I want to watch it badly enough, but it wasn't too bad.
Murder Princess reminded me very much of Slayers, albeit with better art (I love Slayers, but it's hardly high quality in the art department ;). We only saw one episode so far, and it's got what seems to be an amusing plot, with potential. It's only 6 episodes, anyway, so hardly much time to waste if it does go downhill ;)
By far the best thing we've seen recently is The Forest of Pianos, which reminded me very much of a Ghibli film. It features a young and talented pianist, Amamiya, who comes to a small town for a term while his mum looks after his sick grandma. Amamiya's father was a famous pianist, so the boy is expected to follow in his footsteps and has been taught piano from before the time he could walk. In the small town, he meets a boy named Kai, a cheerful and easygoing boy, the type of kid who skips school when he feels like it and runs around the local forest at night. The forest that contains an old, abandoned piano, which Kai plays - very well. It's a really sweet story and very well told, and I'm looking forward to making people watch it ;)
Also on the good stuff list are the things we're watching at Wednesday Anime - Code Geass, Ghost Hound and Pumpkin Scissors. We're also re-watching the wonderful Shamanic Princess - I'm really enjoying Wednesdays at the moment ^^

On the other hand, you can't try new things out without ending up watching bad things. We started a couple and stopped before we even saw the end of the opening - one racing anime (it may have been good, but we just didn't feel like watching cars), one cutesy animal anime, and one featuring ninjas and Girl-in-a-box. The fact that I can't remember their names indicates they weren't much good, but they are trumped by the truly dreadful anime we saw one episode of: Monochrome Factor. It was so full of cliche it was almost bursting, although it didn't quite reach Cluster Edge's level of Fail. The plot went, approximately: pretty boy is bored at school. Pretty boy is pestered by girl with big stick. Pretty boy hangs out with annoying boy friend (note the separation) in shopping centre and beats up thugs threatening old man. Old man is butler to a small boy genius (it wasn't obvious it was a boy until the butler referred to it as 'he'). Boy genius catches pretty boy's eye and blushes. Pretty boy, girl with stick and annoying friend go to school (to pick up girl with stick's teddy!) and demons appear in the corridors. Tall androgynous character with white hair (sigh) and wearing black approaches and offers pretty boy power to fight the demons. Pretty boy refuses. His friends conveniently vanish while he's arguing with tall, dark and maybe-male. Pretty boy runs away, and is almost killed by demons. Tall dark and predictable catches up with pretty boy and does some kind of Pretear-style merge. Pretty boy acquires new outfit, red eyes and darker hair (and bandages around his leg. Why?) and beats up demons. He is teased by tall, dark and androgynous, who says that to turn back to normal he must be kissed again. Pretty boy objects. He gets turned back anyway, and his friends reappear. I think that was probably it, but you get the idea. The only thing that keeps it above Cluster Edge is that it doesn't try mixing lasers and clones with knights on horses with swords.

Unfortunately, Moonshadow has now got it into his head that it would be funny to keep these episodes of fail, and is attempting to acquire Loveless episode 1.