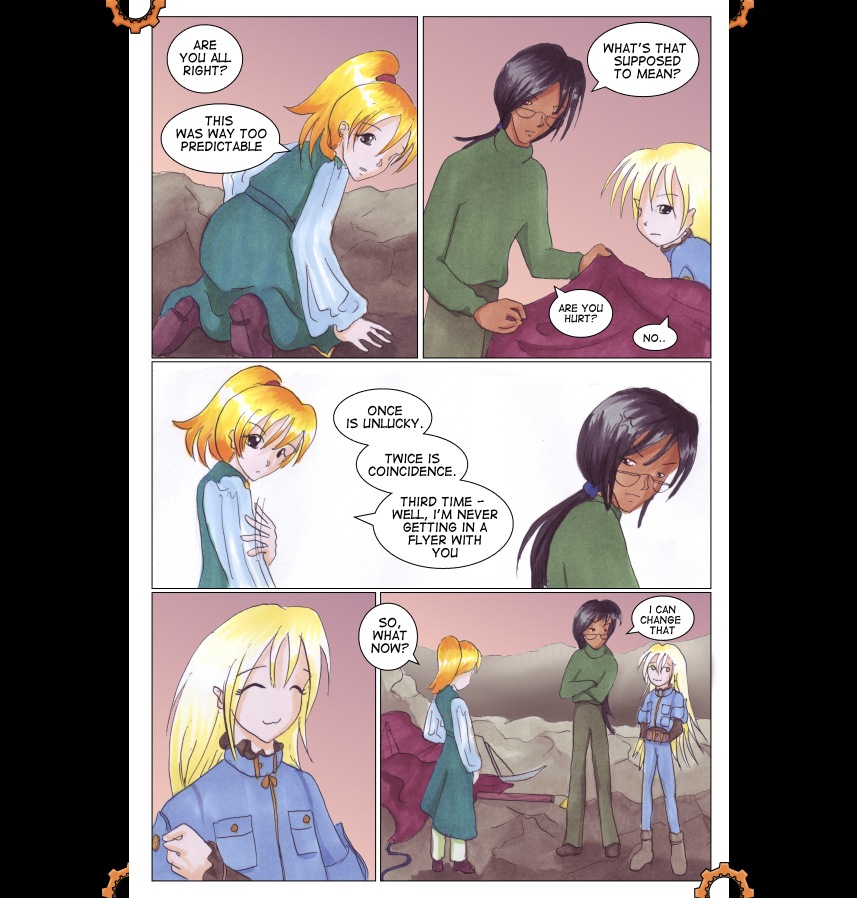 
Minamicon was good fun, overall. To break it down into constituent bits:

Anime - well, they were showing only licensed anime by permission of the licence holders (although in a number of cases this involved fansubs, since the DVDs weren't out yet). We owned and had seen quite a few of the offerings, in particular, Last Exile, Haibane Renmei and Crest of the Stars - all fantastic anime, but there was little point us going to those showings. We watched a fair few, and came away with the following opinions (in brief): Spiral and Tokyo Underground had what promised to be a nice plot but sadly weren't up to bringing it out properly. Misaki Chronicles, Mai-HiME and Madlax all deserve a few more episodes before we decide - all had potential (despite the unfortunate fanservice in Misaki). PlanetES, Scryed and Yukikaze, all of which we missed for various reasons, should also be tried, since the plots sounded promising, and Burst Angel got a recommendation, so we'd like to try that too. Karas should be bought. We also ran across a few old favourites in the dealers' room or around the place, which we've seen bits of and want to buy: Angelic Layer, Chrno Crusade, Saikano, and Starship Operators. We came away with a little more Princess Tutu, some Gankutsuou (another good series we want to watch more of) and - in pride of place - all 76 episodes of Marmalade Boy, plus the movie, on DVD! We've also recently been watching Abenobashi Magical Shopping Arcade, which is good fun, although that wasn't at the con. We were just sad enough to take the DVDs with us.

Dealer's Room - we manned the dealer's table intermittently, and sales were slow but steady. Minamicon is always like that; it's a tiny con and pretty much everyone has seen our older stuff before. Looking for the Sun volume 2 did gratifyingly well :) I also helped with a page layout workshop on Sunday. It was a last-minute participation; I hadn't prepared for it, but it seemed to go down well. I don't think I'm especially qualified to talk about manga page layouts, given my normal habit of doing boxy Western layouts, but never mind.

Cosplaying and other events - I dressed up as Yomiko Readman (Read or Die) on Sunday, because it's a very easy costume, and got two photo requests *^^* It only really works with the coat, though - without that, I look like a hotel employee or a run-away air stewardess! The masquerade was great as usual, with my personal favourite being the Cloud who swaggered into the aisle complete with huge sword and announced, 'all right ladies, you can start screaming now.' I knew the guy - we had the sword in our room - and he has a very good stage presence. The Minami judges normally allot prizes to the costumes they thought best, making up silly categories for each one, and he won the 'I've got a big one poser' prize. We did submit an AMV, but we were the only ones to do so, and it didn't get shown. Perhaps we'll put it in for Amecon. I completely missed the art competition, which was stupid, but I did win a prize at Sana-chan's limbo at the party on Friday night. I got a car from Lupin, complete with wind-up key and a little Fujiko. Weird..

Generally, it was a fun con. I like Minami; it's got a good atmosphere and there are good people there. We booked for next year.

Oh yes, and the pastel pictures I did on Thursday are now up in the gallery. I drew them to go in Artifaxis print packs as extras - my first real try with pastels: Miriam, Rua and Rain.